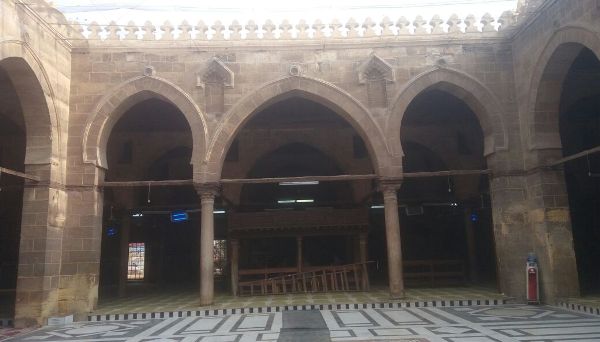 The mosque was established by Sulta al-Ashraf al-Barasbay betwee (831-841 / 1427-1437). The ame of the city of Khaka is attributed to the Khaka, established by al-asir Muhammad ib Qalawu i the year 725 AH The argumet for stoppig Sulta Barsbay has stated that this place is a mosque ad ot a school. The mosque was amed by the Sariacus Mosque ad the argumet is metioed that the mosque is described as Maulaa Sulta al-Waqif, a mosque i which the prayers ad the supplicatios are held. Ad Eid ad do what was customary i such a situatio ad stop the dikkah i frot of the pulpit ad authorized the ears of the ears o Friday to elarge ad cheerig stop the miaret metioed for prayer ad praise ad praise ad magificatio every ight ad it was added that this tow had other buildigs of the Sulta, It is a gorge dedicated by Salt Sophie ad its water ext to her bathroom, kitche ad ceased to exist oly mosque 0 The mosque cosists of a square area with a ope courtyard curretly surrouded by four caopies. The mosque has facades built of stoe ad its orth-easter facades with the mai etrace. Aother etrace to the orthwester façade is likely to have a third door i the southwester directio. The miaret is similar to the miaret of the Ashrafieh school The road is located at the easter corer of the plaig ad is oe of the types of the two ways