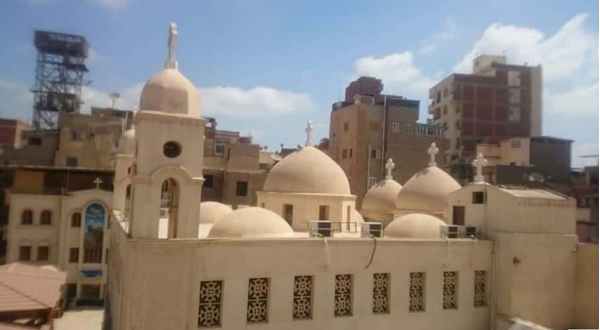 The Holy Family passed by ad stayed there for 17 days, ad gave the Virgi Mary a stoe metaphor that she used i the dough, ad the church still retais the mages to make her visitors come from all over the world. I additio to the well from which visitors of the church drik from Muslims ad Christias to request the blessig. The church belogs i its geeral desig to the Byzatie style, but it is ot affected by the ifluece of the basilica style, especially i the divisio of its area ito three log alleys extedig from west to east, ad thus the church became like most churches, which represet a mixed model combiig the elemets of the Byzatie ad Byzatie styles. The church cosists of a square area divided by two rows of blocks to three logitudial legths, the largest oe, each cosistig of two pillars of marble, ad o it are semi-circular cotracts that bear the roof of the church. The orther, souther ad wester walls of the church ed with circular cotracts. The bottom of these uits is made of fie wood. The woode veil i the Church of Martyr Abaoub ad the veil of the church is a aciet veil datig back 550 years. The church cotais a large collectio of archaeological icos ad holdigs of the church ad displayed iside the two vases of the presetatio of the House of Prayer museum.

24 Replies to “Church of the Virgin Mary and martyr Abanoub”