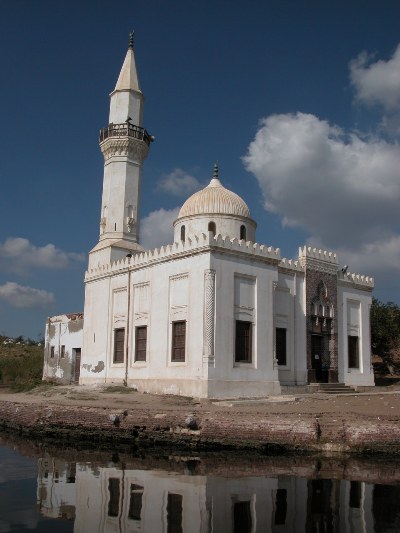 The mosque has four facades, the middle of the orther part of the wester side is the etrace to the easter mosque, which is held by a triagular bridge. The etrace thresholds are topped with a white marble plate with a Arabic iscriptio i the thuluth script bearig the date of costructio 1312. The orther façade is a rectagular etrace, O the wester side of the orther façade there is the frot façade. The wester façade opes with a rectagular door that faces three sides. The souther façade, the easter part of which represets the façade of the mausoleum ad the west, opes with rectagular widows of iro. The mosque is a square area divided ito three corridors by two marble pillars, with poited cotracts o which the woode ceilig rests. The ceter of the mihrab is the qibla wall, which is tapered with a tapered cotract, which is based o two colums of marble, with poited crows ad a woode pulpit. It is decorated with a molded woode cartel ad forms of stellar plates. The stylized door cotais stellar shapes ad domes with domes of parallels. The spur is located i the south-easter part of the wall The Qibla is a woode dome decorated with stellar objects, geometric shapes, a ivory restaurat ad a shell. The dome of the mausoleum is topped by eight matras. The miaret is located o the southwester side ad has a square base topped by a octagoal floor. The promiet Qualities of the muezzi cycle, Ialo this floor eds aother floor of the highest summit of the miaret Edged.